The Ambassador whose appointment forced an international conversation that not only advanced the human rights of a nation, but forever changed the Catholic Church.

Not only did James "Wally" Brewster make history in 2013 when he was appointed the first openly gay U.S. Ambassador in the Western Hemisphere, but the highly conservative nation he was named an envoy to created a challenge and international attention unlike any other diplomat had experienced. One that not only impacted two nations, but also led to a groundbreaking moment in history that found the Catholic Church publicly redefining their meaning of true equality for all. 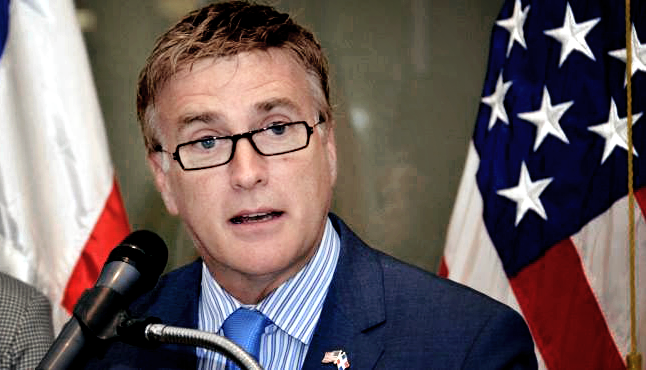 From the moment Ambassador Brewster's appointment was announced, Cardinal Nicolás de Jesús López Rodríguez – the most powerful and influential leader in the country – voiced harsh objections to the appointment. The Vatican's ambassador to the Dominican Republic welcomed Brewster to the country with a veiled threat, telling him: "If you keep your private life behind the walls of your embassy, you'll be O.K. here".

It was the start of a very public campaign to oust the Ambassador from office out of not only his nonacceptance towards his sexual orientation, but also due to the Ambassador's unwillingness to back down from accomplishing the priorities of his administration – which included not only advocating for human rights, but also improving areas of trade, environment, corruption, and public health and education.

Thus, over the next four years, Dominican Religious and Political leaders encouraged its citizens to rise against Ambassador Brewster through the use of daily threats, anti-gay vulgarities, and assaults via the nation's newspapers and television news. Even going as far to launch a "Black Monday" nationwide march to oust him and his spouse from office.

I could confirm myself that the opposition has been even worse from what has been reflected in the news. As a Dominican, I feel ashamed this is happening in my country. The evangelical church is convoking the general public to reject this ambassador. [It's] asking the public to show a black band, black banner or ribbon on cars or dress showing rejection.

As the attacks directed at the Ambassador continued to escalate – on a global level, it was contributing to an ever-deepening divide between the Catholic Church and LGBTQ community due to international exposure of the Cardinal's assaults at the Ambassador.

It reached the point that the United States government had to finally get involved. U.S. Congress wrote a letter to the President of the Dominican Republican voicing their support for Ambassador Brewster, saying:

"We write to you to reaffirm that Ambassador Brewster has the strong, unambiguous support of the U.S. Congress and that we will oppose any efforts to remove him from his post."

The State Department also released a public statement, and Congress took to social media using the #ImWithWally hashtag to reiterate the United States' support behind Ambassador Brewster and the impactful work he was doing for Trade, Environment, Public Health, Corruption, and Human Rights within the Dominican Republic - in spite of all the attempts to overshadow it.

Finally, in an unprecedented move, the international debate got so heated that Congress - spearheaded by Senator Dick Durbin - penned a letter to Pope Francis urging him to intervene on behalf of the Catholic Church and speak out against the actions of the Dominican Cardinal, saying:

"Despite these hateful words and personal attacks, Ambassador Brewster has worked to quiet the conflict between Church leaders and himself. His patience and professionalism in light of these mean-spirited attacks by the Cardinal demonstrate his personal commitment to his responsibility of representing the United States of America.”

IN A LETTER TO POPE FRANCIS

THE CATHOLIC CHURCH IS FORCED TO RESPOND
CREATING A HISTORIC SHIFT

Finally, on June 26, 2016, Pope Francis gave an historic public apology to the L.G.B.T.Q. community on behalf of not only himself, but the Catholic church. The timing of the apology in relation to the U.S. Ambassador’s highly controversial and public plight with the Cardinal over the previous four years was not lost on leaders and news outlets. A monumental shift had occurred.

Shortly after, the Pope also retired the Cardinal, and demoted the Priest who aided the Cardinal throughout his corrupt leadership.

Ambassador Brewster's tenure had officially become part of a historical conversation at the Vatican that changed the worldwide Catholic Church forever.

KEY ACCOMPLISHMENTS MADE
IN THE FACE OF OPPOSITION

Despite the incessant opposition, challenges, and threats he faced over the course of his four year tenure, Ambassador Brewster was recognized internationally not only for the grace and dignity he maintained throughout – but also his ability to still accomplish extraordinary initiatives for the Dominican government, society and the business in spite of the obstacles he faced at every turn.

While the Cardinal and church leaders made attempts to impede every vital initiative the Ambassador set out to accomplish, he remained steadfast in vocalizing his concerns in order to fulfill the duties of his office, noting at a press conference:

"They say that when I speak, when I call for some action, when I speak in favor of some reform, I am violating the sovereignty of the Dominican Republic…My job is to represent President Obama to the Dominican Republic with full authority to protect and defend the interests of the United States, its businesses and its people, while protecting human rights, enforcing international law, and promoting our bilateral relations."

As a result, his tenure is credited for succeeding in leading significant, unprecedented change across a range of disciplines that strengthened and prospered the relationship between the United States and Dominican Republic, of which included:

A few years into office, in an official poll given to the citizens of the Dominican Republic, asking the nation what individual they as a country most revered. Their response?
United States Ambassador, James (Wally) Brewster, came in second only to their President - a first for a U.S. Diplomat in the nation.

The below excerpt from the "The Washington Blade" sums up the effect of his and his husband's presence and lasting effect on the country:

Activists in the Dominican Republic who attended an LGBT conference in their country’s capital this past weekend say former U.S. Ambassador James “Wally” Brewster’s departure has left a deep void. Lupita Raposo, a transgender woman and activist from La Romana, a city in the eastern part of the country that is near the resort of Casa de Campo, told the Blade during the reception at Gómez’s home that Brewster and Satawake helped challenge stereotypes about LGBT people in the Dominican Republic in spite of the backlash they received. Raposo told the Blade the Catholic Church in the Dominican Republic and the cardinals within it can have more power in the country because Brewster and Satawake are no longer challenging them. She also said Dominican LGBT rights advocates are afraid they will lose U.S. support.

For his work against corruption and defending Human Rights, Ambassador Brewster received numerous awards including FOREIGN POLICY MAGAZINE's 'Top 100 Global Thinkers' in in 2016, 2016 's 'OUT 100' List, and a finalist for the prestigious 'Susan Cobb Award' presented to top diplomats by the U.S. State Department.